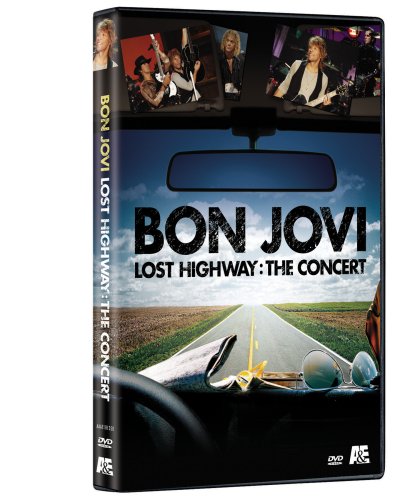 This rare and exclusive performance brings the critically acclaimed and #1 album LOST HIGHWAY to life. Track by track and in sequence; BON JOVI recount the tale that is the LOST HIGHWAY. Performed on a stage constructed especially for this unique and historic night; LOST HIGHWAY: THE CONCERT comes complete with band interviews, backstage footage, and chart-topping tracks; It s My Life, Wanted Dead Or Alive, and Who Says You Can t Go Home.

FEATURING LIVE PERFORMANCES OF: Lost Highway, Summertime, (You Want To) Make A Memory, Whole Lot Of Leavin , We Got It Going On, Any Other Day, Seat Next To You, Everybody s Broken, Till We Ain t Strangers Anymore, The Last Night, One Step Closer, I Love This Town, It s My Life, Wanted Dead Or Alive, Who Says You Can t Go Home

The band members refer to it as their "Nashville album," but make no mistake about it: a fiddle here or a pedal steel guitar there won't change the fact that Lost Highway, performed in its entirety in this 2007 concert, is every inch a Bon Jovi record--not their best, perhaps, but one that is nevertheless extremely popular and embodies all of the veteran band's strengths. The setting here, a Chicago studio with a stage constructed specially for the occasion, is obviously more intimate than the humongous stadiums they fill on tour, but singer Jon Bon Jovi, guitarist Richie Sambora, and their mates (augmented here by four additional musicians) are still one of the ultimate arena bands, pumping out the kind of tunes that inspire the faithful to pump their fists during the guitar solos and sing joyfully along with the big, anthemic choruses that are a staple of the Bon Jovi repertoire. Lost Highway has plenty of those (cf. the title song, "Any Other Day," and "I Love this Town"), mixed in with ballads like "(You Want to) Make a Memory" and "Seat Next to You." These and other songs offer the kind of universal, if somewhat facile, sentiments (life's tough, we all feel alone sometimes, but when the chips are down I'll be there for you) summed up by Bon Jovi's comment about the songwriting process: "Our story becomes your story." Filmed in high definition and sporting excellent sound, the concert also features performances of "It's My Life," "Wanted Dead or Alive," and "Who Says You Can't Go Home." Brief interviews with Bon Jovi, Sambora, drummer Tico Torres, and keyboardist David Bryan are the principal bonus features. --Sam Graham

Beyond Lost Highway: The Concert

Stills from Lost Highway: The Concert (click for larger image)

Don't forget to upgrade your browser

This browser is not supported.
Download the latest browser below to get the best possible experience.

Wherever Kids Learn This Year, We're Here for You

Raise Funds for Class with ClassroomsCount™

START A CAMPAIGN
for educators

Get Set for Back to School

Josephine Against the Sea

Get kids excited for the year with skill-building resources and fun, relatable reads about the joys of Kindergarten

Just in Time for the New School Year

Expand your book collections with titles selected by teachers.

Inspire literacy and learning for all students with our comprehensive solutions